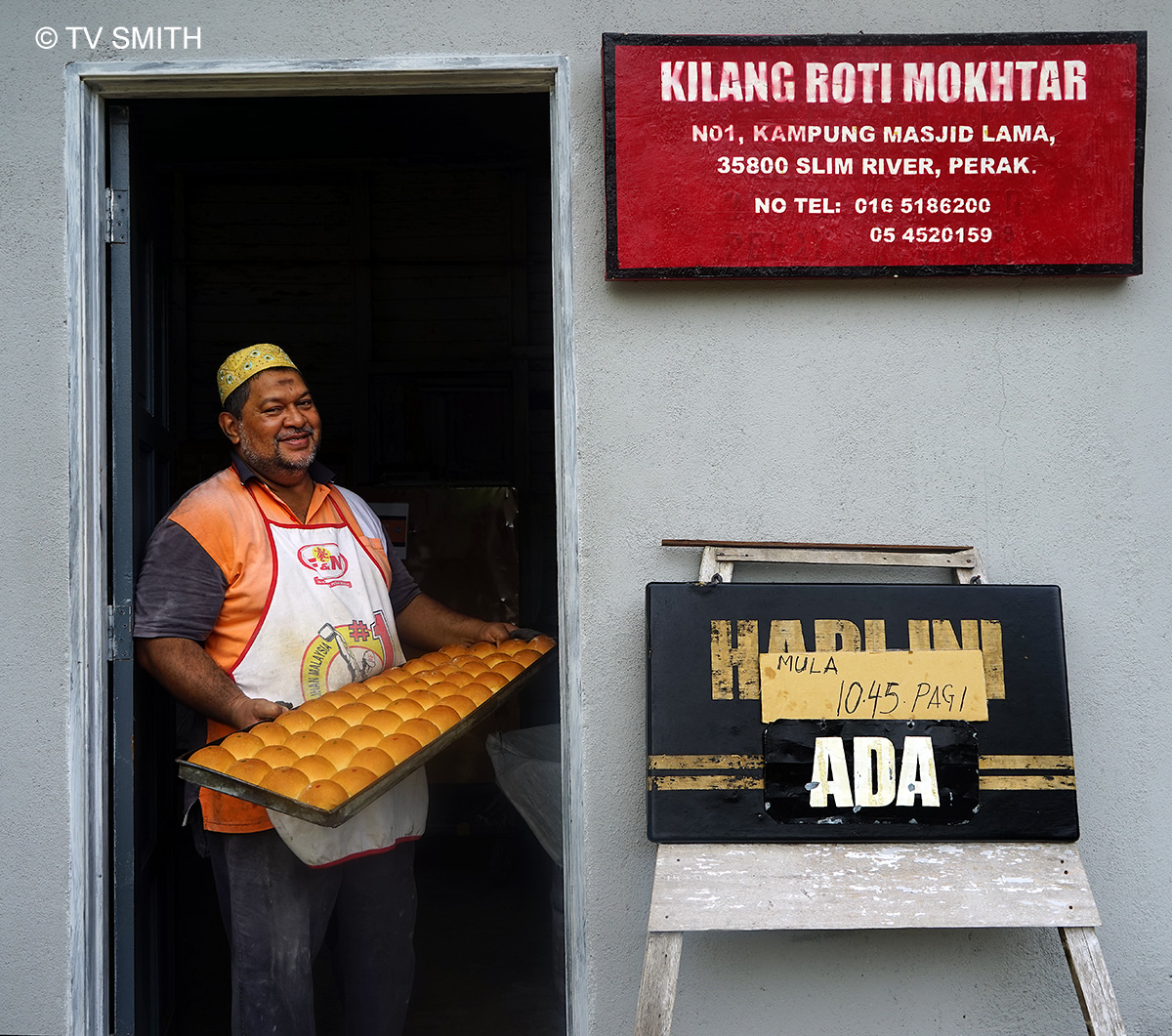 It is unfortunate that this more than half-a-century old bakery is known as a factory (or kilang). In reality, it is a one-man baker outfit and an artisan one at that. Every loaf, bun and pastry is lovingly hand-crafted by Mokhtar himself. No workers, interns or apprentices behind the scenes.

Put him in Klang Valley and call it a boulangerie patisserie instead of kilang and fad-hungry hipsters will swoon all over him , even without him proclaiming sourdough.

We must be thankful that Mokhtar don’t give two hoots about such things. Not even about glutens. The easy-going character don’t care about a lot of things. He opens at 10:30am or thereabouts and closes at 11:30am or thereabouts, earlier when the breads are sold out.

Fortunately for his customers, the man is OCD about signage. On those days when he decides not to open, Mokhtar places signs on the roads outside announcing “Kilang Roti Tutup” (Bread Factory Closed). They are like those middle-of-the-road placards you see when roads are closed for National Day parade rehearsals. After all, the man and the bakery is Slim River’s most famous landmark or attraction.

It took me three trips on three different days before I could catch him in person. Greeted by a shut door previously, I ended up staring at the piles of broken furniture lying around the yard. That kind of gave me a clue on the eccentric character that he is. Don’t tell me he uses all these broken furniture as firewood to fire up the oven, I wondered.

As it turns out, we get along quite well. For I am as eccentric and OCD like him. I keep telling him the door is not perfectly level.

More on the bakery coming up. 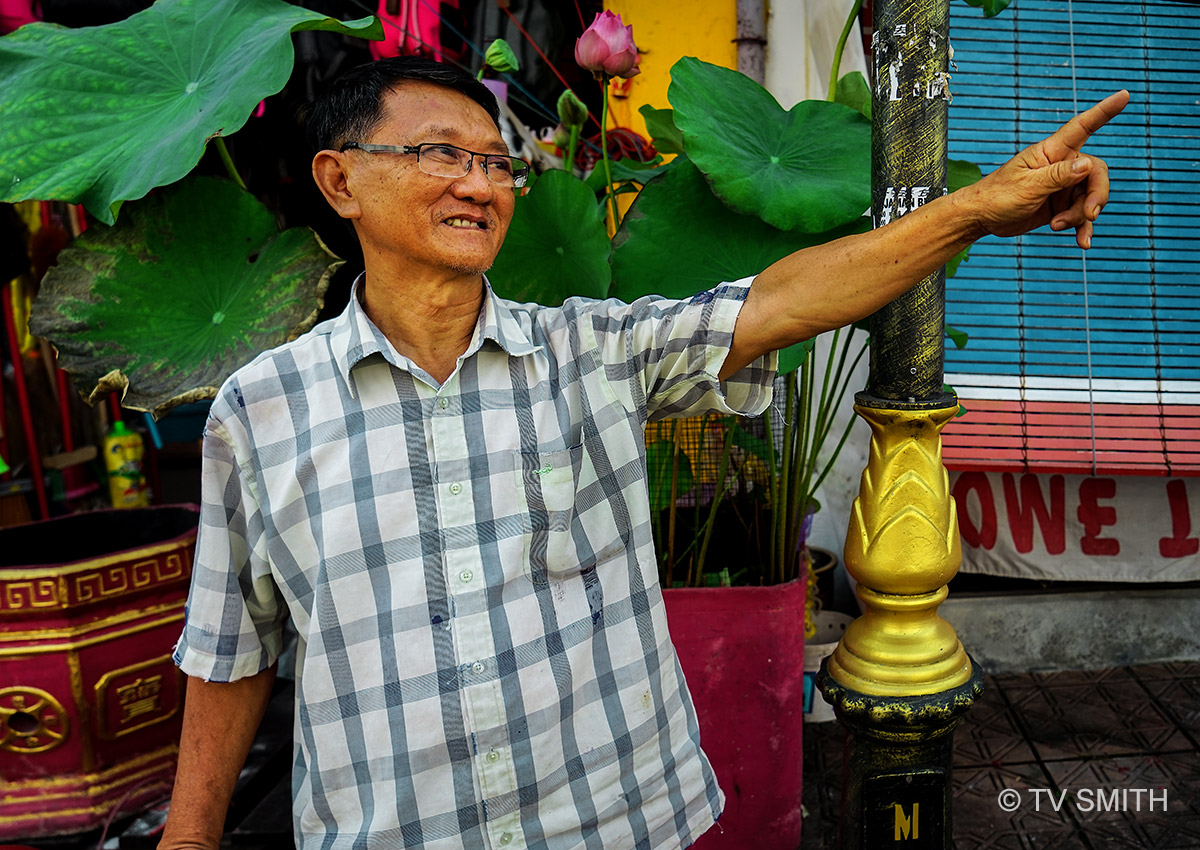 Many of the shops in small towns along Federal Route 1 are dying, if not dead. Mr Yang, a long-time shopkeeper in Slim River town told me he is glad I am here to photograph the town now and not later. I asked why. He said if I were to come later, many more local old businesses will be shuttered or turned into something else.

It is not the new highways that are by-passing old towns or the shrinking population to be blamed, according to this old timer. The bitter truth is there are few young people interested in taking over a traditional family business. To blame other factors is to be in denial; said the man in honest introspection.

Be it a Chinese medical hall, an Indian grocer or a Malay tailor shop, the founder’s younger descendants see their future elsewhere. Mr Yang contends the new generation prefers a business with quick profits.

Nobody wants to idle away their lives stuck with a slow-moving business in a sleepy town. Old money has lost its charm; I added and he concurred.

To steer our conversation to a less-depressing subject, I asked him about remaining unique or interesting businesses in town.

He then pointed in the direction of a Indian-Muslim bread factory that is now in its third (and probably final) generation. I’ll visit it next. 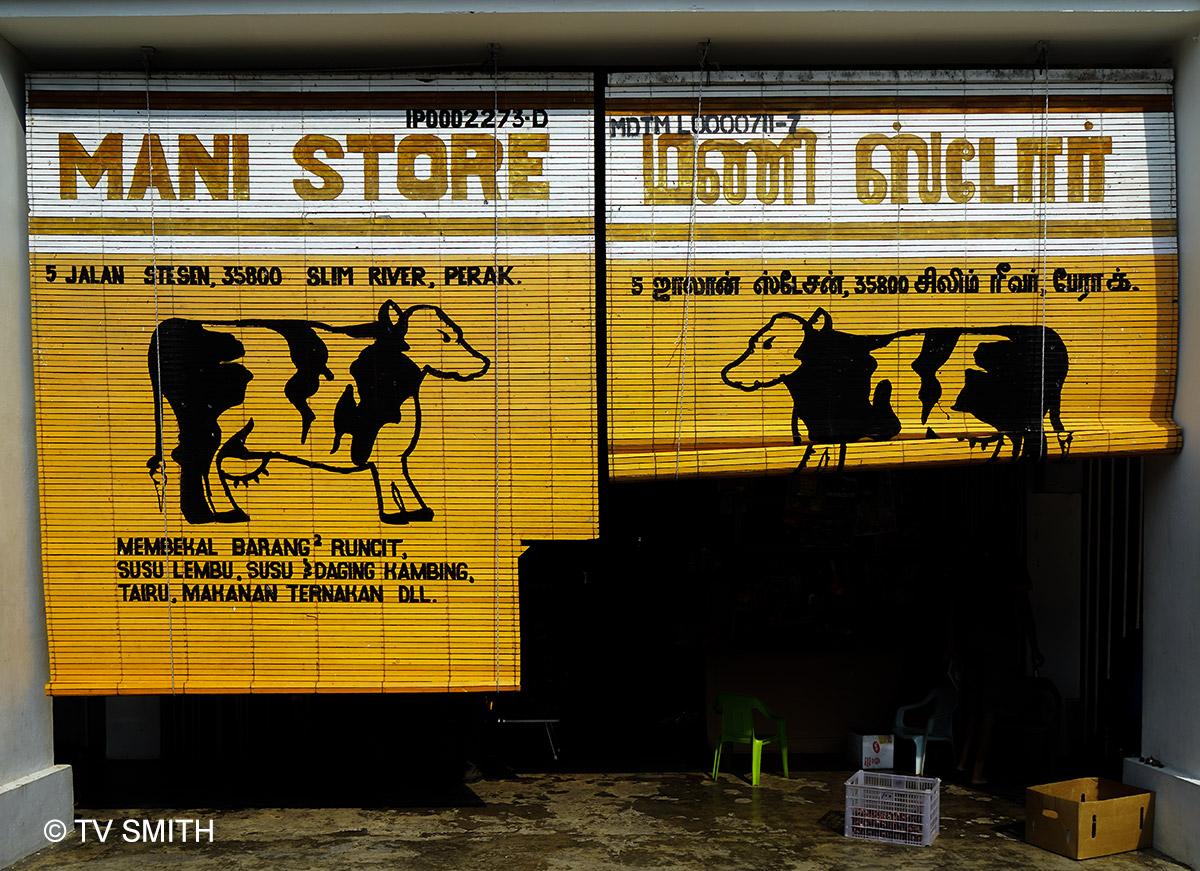 Mani Store in Slim River sells fresh cow’s milk, among other things. The Indian family business started 78 years ago with a small herd. They now run a ranch with 180 cows, supplying milk to its own shop and to a government agricultural agency.

I spoke to the lady proprietor who is a devout Anglican Christian. Funny to hear from a cattle ranch owner that Slim River is a cowboy town. Not in the lawless sense but in its visual representation of a one-street town with rustic shops, I guess.

I walked down the main street like a gunslinger and the town dwellers stared at me, as expected. They didn’t challenge me to a quick draw though. If there is going to be any shooting, it will be with my camera.

Some of the curious town folk engaged me and we ended up with very interesting conversations. In upcoming pictures, we’ll meet some of the ‘cowboy town’ people on Main Street, Slim River. 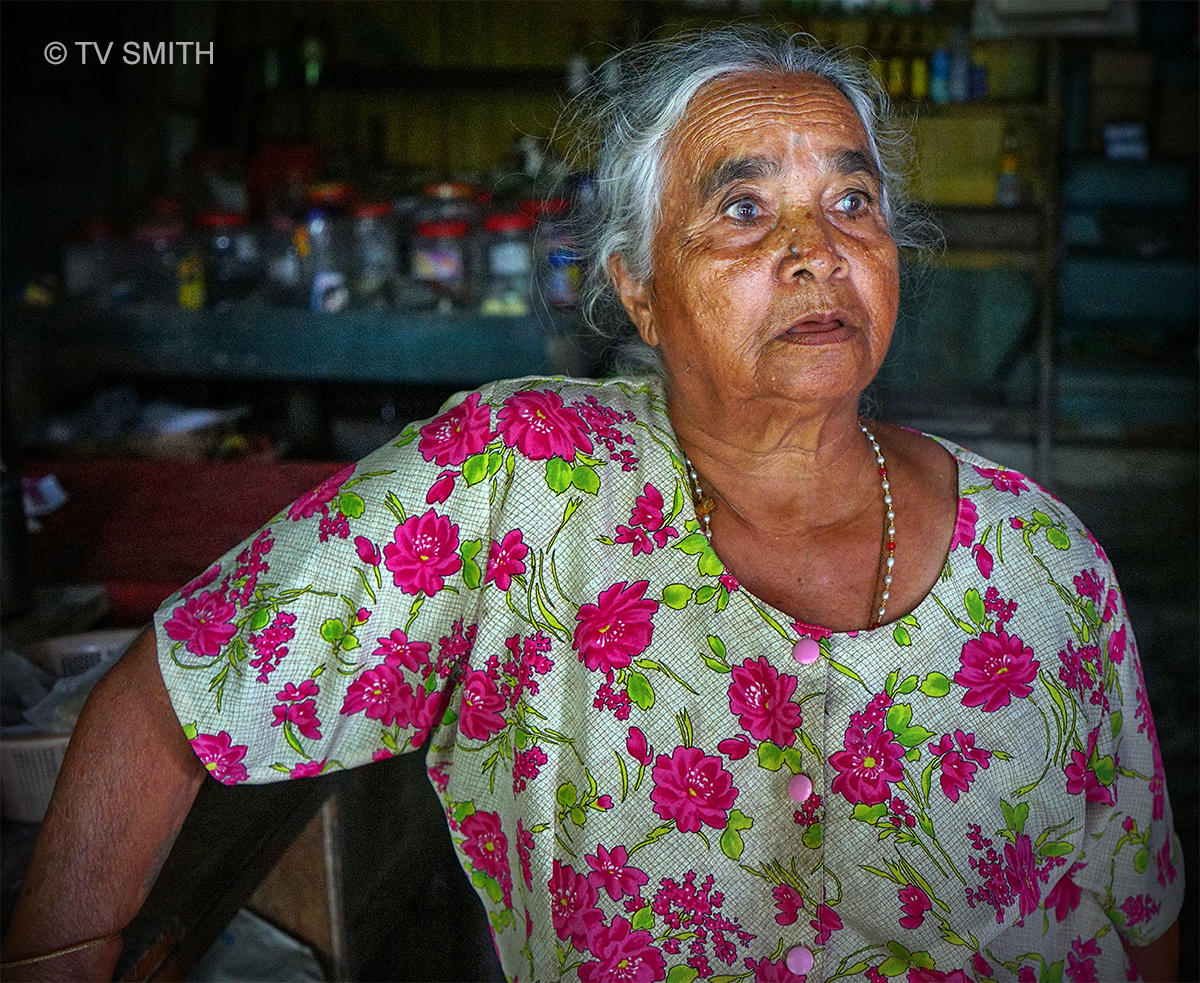 Still in Behrang, I walked into a vintage Indian grocery shop to get a soda. Met a friendly and sweet old lady there. She’s the proprietor, is in her seventies and operates the shop by herself.

The surroundings seemed deserted and she appeared delighted to see a new customer. Delighted not so much for the sale but for a chance to talk, I guess.

After the initial chat, I asked if I can photograph her as we speak and she agreed. Glad I asked because she was very natural in front of the camera. Depending on the subject we broached on, her facial expressions changed quickly from that of amusement, fear, excitement to sadness.

We spoke about the decline of Behrang town, the floods that hit her shop and life in a small town. I asked about her children. She turned her eyes away and paused for a little contemplation.

With a heavy sigh, she explained they left for the city a long time ago and no longer stay in touch. 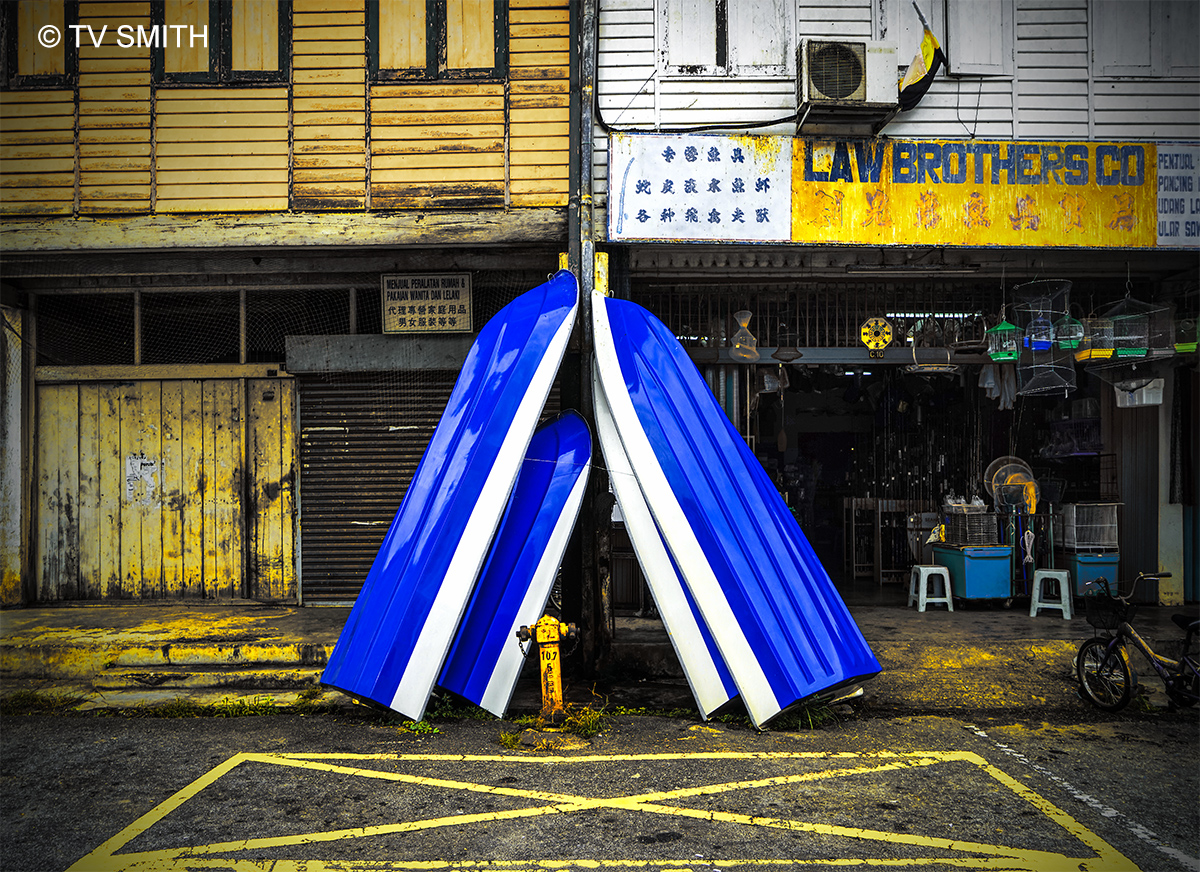 In one corner of old Behrang town, there are 5 shades of blue and yellow.