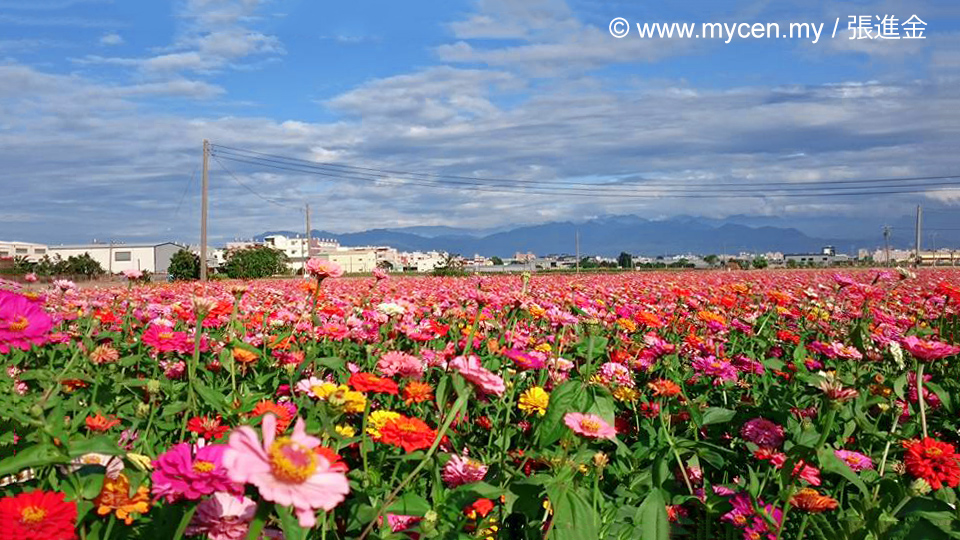 My friend 張進金 – Zhang Jin Jin, who provided me with the Taipei 101 image loves photographing flowers. He traveled 270 km from Taipei to Taibao in Chiayi County in Taiwan to visit the Taibao Sea of Flowers Festival Floral Fest.

The paddy farmers there plant canola (yellow flowers) and cosmos seeds (red-pink flowers) on the organic rice fields during the fallow period to grow a sea of colorful, colorful and romantic flowers attracting honey bees, shutterbugs and selfie addicts.

Depending on time of year, one can also see cherry blossoms and tulips. A brilliant tourism idea. My first time hearing of the beautiful city and county.

Find a hotel with special deals at Taibao here: http://www.mycen.my/taibao-hotel-deals-finder/ 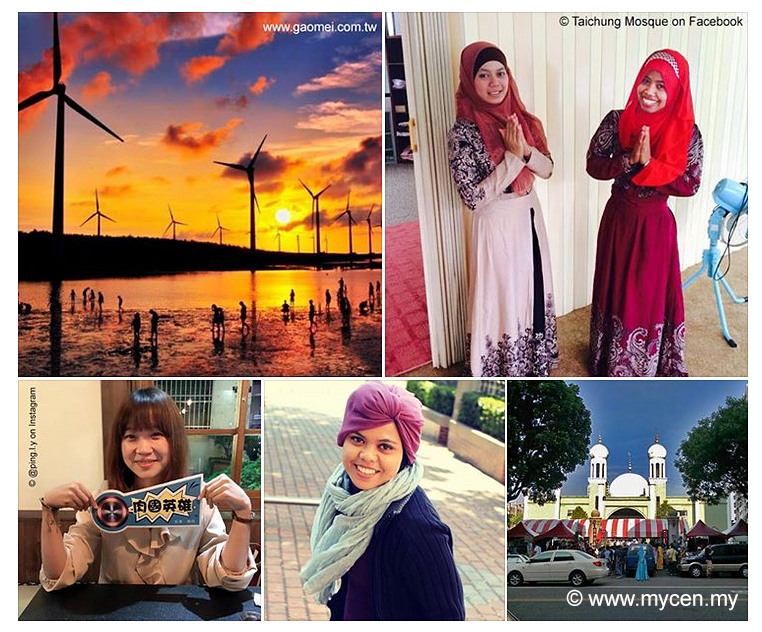 Taichung City is a municipality located in center-western Taiwan. Taichung has a population of over 2.7 million people, making it the third largest city on the island after New Taipei City and Kaohsiung. An aboriginal revolt broke out there in 1731 after Chinese officials had moved in and compelled them to provide labor.

The city is now a modern industrial seaport but with many nature attractions and cultural attractions such as temples and a mosque (Taichung Mosque). Pic attached and attributed to Lina Chen El-fatih (https://www.facebook.com/zulfa.elmustfathsyatibi). Other pic @Zikra Yanti (https://www.facebook.com/zikra.yanti)/ All mosque and mosque related pics from Tachung Mosque’s unofficial Facebook Page.

I pinged my friend and Instagram follower @ping.l.y on IG, a Taichung school teacher and selfie specialist (pic attached) who pointed me to the amazing Gaomei Wetlands of Taichung with beautiful sunsets and wind turbines of the Taiwan Power Company. I contacted http://www.gaomei.com.tw and one helpful Vincen said I can use one of the pics suggested by Ping. (pic of wetland attached)

I love my job as the webmaster of MyCen Hotels, as I learn something new every day. 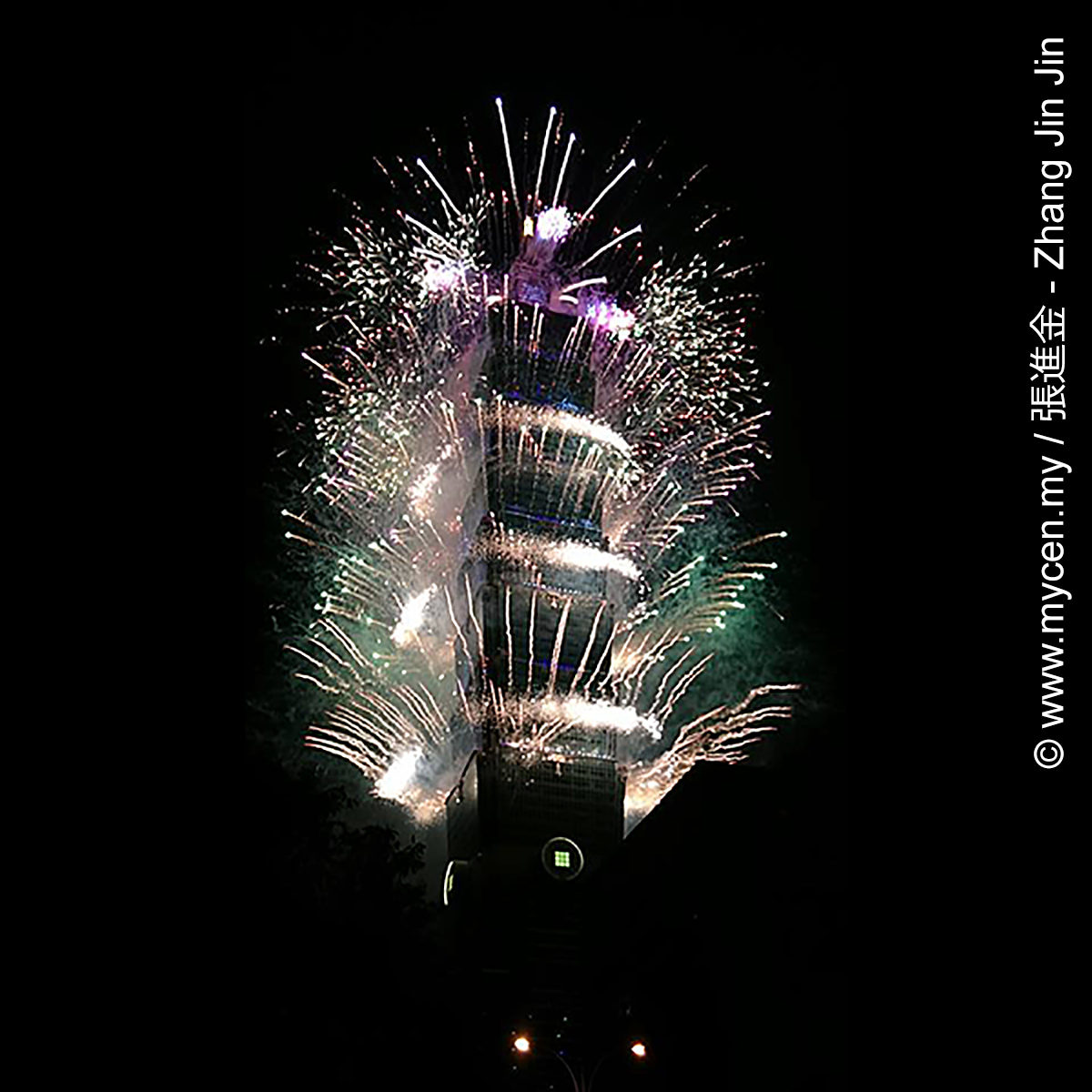 Taipei’s iconic Taipei 101 landmark was officially classified as the world’s tallest skyscraper when completed in 2004, and remained such until the completion of the Burj Khalifa in Dubai in 2009. Was tough finding a decent pic as the standalone solitary tower is hard to photograph in front of a bright sky. It is still the tallest and largest ‘green’ (environmentally responsible) building in the world.

I remember 張進金 – Zhang Jin Jin, a Taipeh resident and fellow photography enthusiast, posting some gorgeous pics of he tower with fireworks shooting out on New Year’s Eve 2017.

I contacted him to obtain permission to feature his pic.Of course, there is much more to see in Taiwan with its unique history and geographical location. Hope to look at some other provinces and cities in the Island of Taiwan soon.

Book a room in Taipei at special discounted rates here:

Additional comment by journalist Rian Maelzer: “I interviewed the architect and the master developer. One key feature is its ability to withstand the frequent typhoons that batter the island as well as the possibility of earthquakes. It has a sort of giant pendulum counterbalance at the top of the building to offset the sway. Taipei 101’s design is inspired by bamboo.” 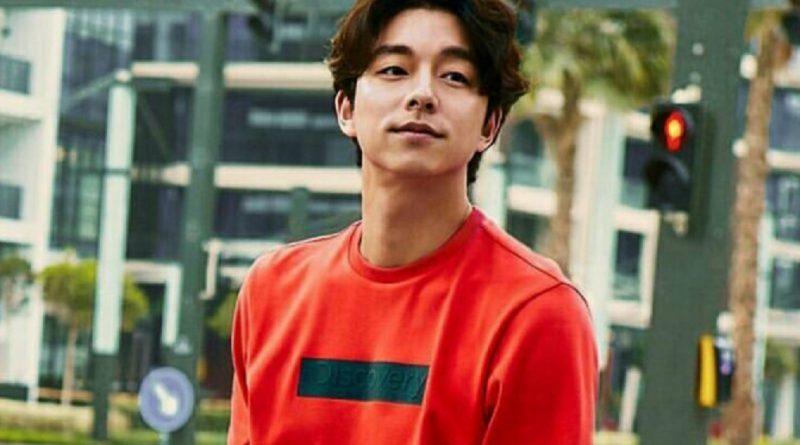 “Gong Yoo’s Hotel Room in Taiwan Costs 20 Million Won?” as reported by Castko via Mycen Hotel’s Hotels In The News

The South Korean mega-heart-throb and megastar of zombie blockbuster Train To Busan reportedly paid 20 million South Korean won a night for a hotel room in Taipei? That is something like RM 74000 or USD 17600 approximate a night. He is big in Taiwan, with thousands of female fans screaming outside the hotel. But still?

There is possibly something wrong with the math or it is a non standard room since his entourage consists of 15 bodyguards, his parents, people to take care of his parents, make up artists and hair stylists.

Since he is so sweet and filial to bring his aging parents along and he supports a campaign to ban animal testing in the beauty industry, I will gladly help him get a normal room for just RM 1745 at the same hotel a night via MyCen Hotels. Price was last I checked.

Link to room at http://www.mycen.my/hotels-in-the-news-part-4/

Gong Yoo’s pic credited to Castko from their report at http://my.castko.com/archives/9152