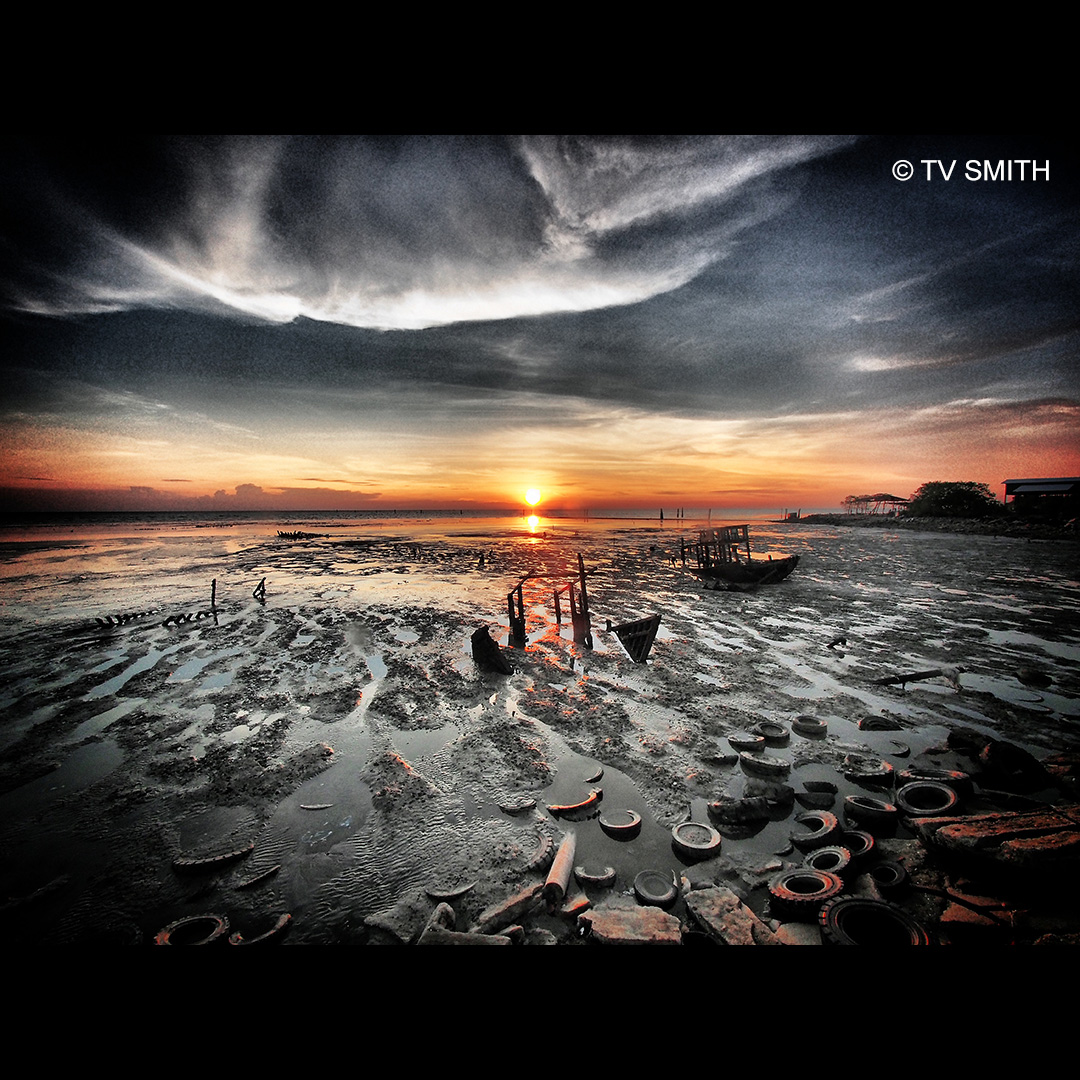 Beaches For Your Sunset Pics – Part 2.

Next up on the sunset beaches series is the sneakily named Pantai Redang in Sekinchan. On a part of Redang Beach less trodden, is an isolated corner I called the Graveyard Of Fishing Vessels. Hauntingly beautiful and off the beaten track.

The skeletal remains of retired fishing boats are laid bare during low tide. I love this swampy coast in northern Selangor. When the light and clouds mashed up crazily, the land and seascape exudes a post-apocalyptic feel. Eerie and awesome.

See Hotels in Sekinchan if you need to spend a night. 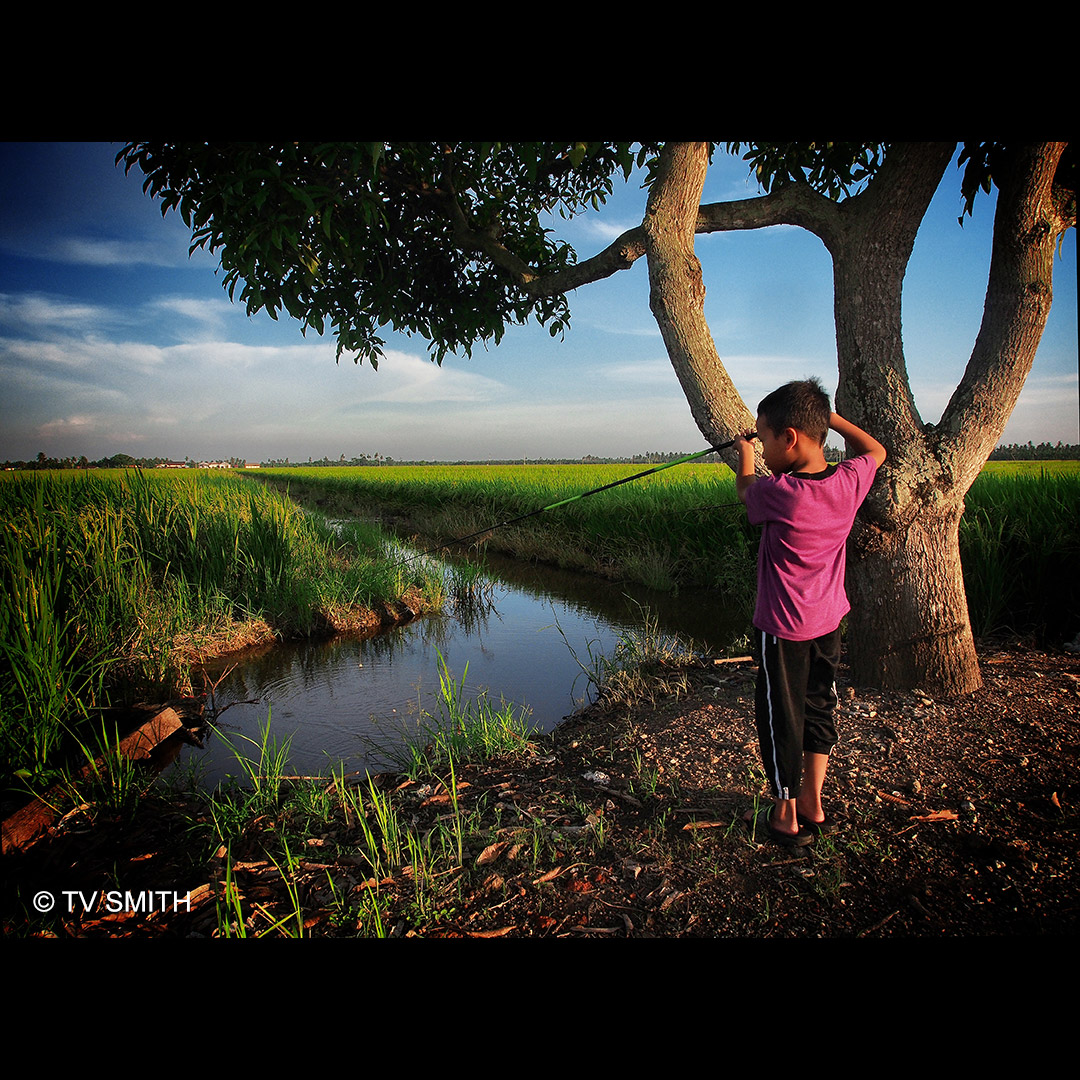 The boy may have no game controller nor a tablet screen to tap. His display shows endless rice fields and his controller is a fishing rod. The natural sound effects are from chirping birds and buzzing insects. The country kid is richer with the simple joys of life.

Stay in a hotel in Sekinchan and go irrigation canal fishing yourself. 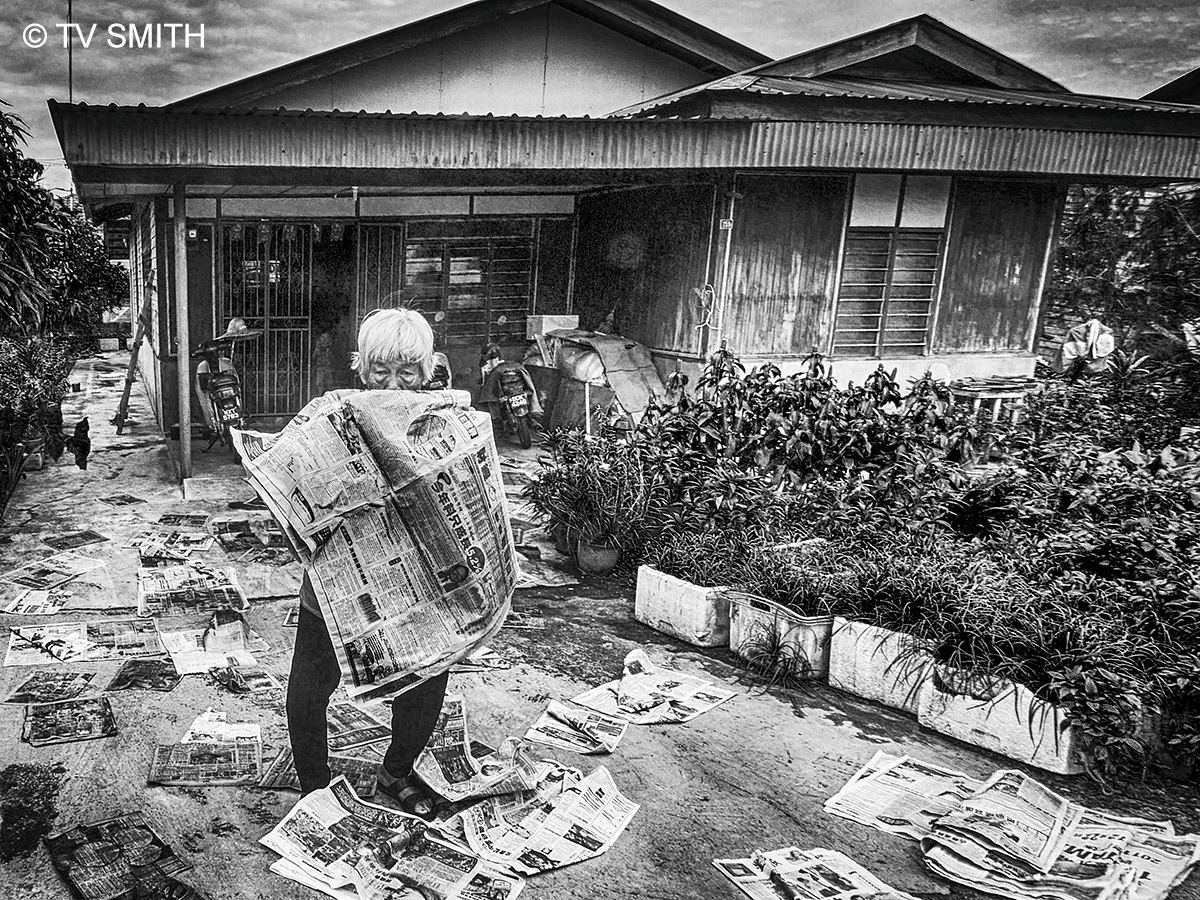 I don’t know what was going on. A senior citizen was arranging some old newspapers outside her house in a village in Sekinchan paddy land. I was a passenger in a car and I shot with the window rolled down.

You can take preemptive actions such as upping the shutter speed and deciding how you want to frame it before the car approaches. I kept one finger on the exposure compensation dial as I was thinking her silver hair might be problematic. It wasn’t in the end as the camera’s dynamic range contained it.

While anticipation is good, I didn’t expect her to lift up the broadsheet to conceal herself at the critical moment. I cued driver and friend Daniel Tang to look at my LCD screen so he can adjust or pace the car’s speed accordingly. Takes practice but I have been on many trips with him in the past.

I chose a black and white rendition as the vegetable patch was overwhelmingly green. Black and white also gives street photography the raw and gritty look befitting the subject. 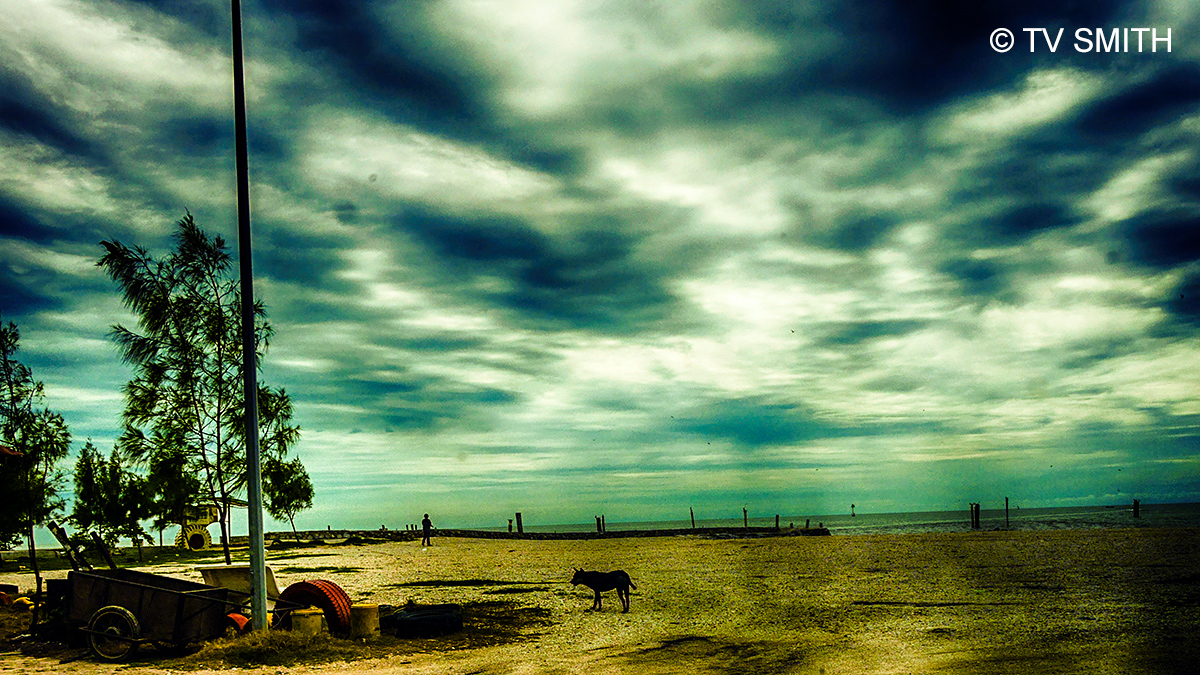 They always have a stray dog population that is out of control. Whether it is Pulau Ketam or Sungai Besar or here in Pantai Redang in Sekinchan.

Fishermen feed stray dogs with raw fish when the boats come in. The wharf area attracts so many mangy dogs. It is heartbreaking to see them. They are silent victims.

With Sekinchan becoming an affluent area, I hope some of the rich and educated locals will come back to start a shelter and NGO to educate the fishermen on responsible animal ownership or to take care of sick ones and to provide spaying and neutering. The vicious cycle can end. 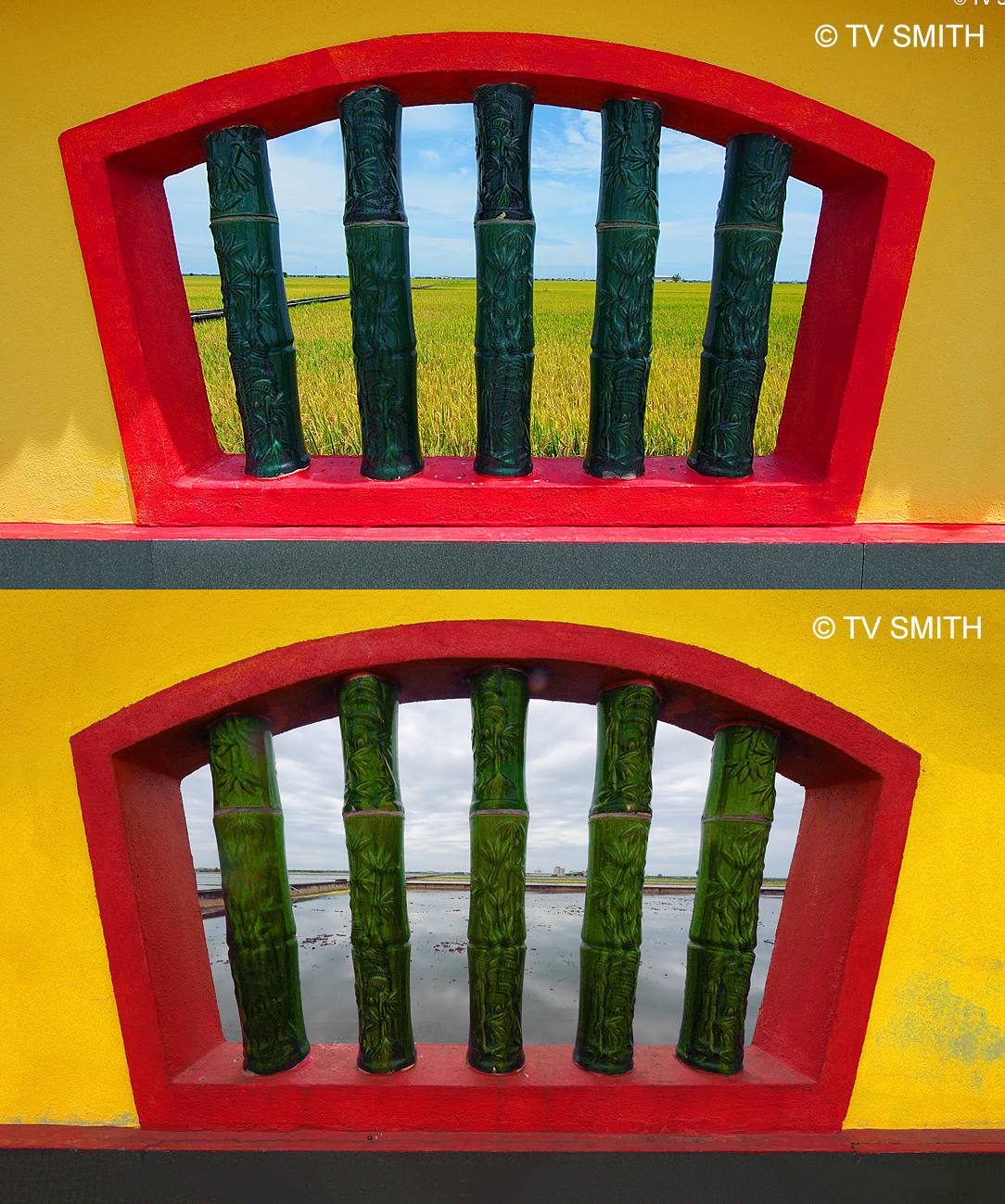 Then And Now – Looking Thru The Time Tunnel.

The Sekinchan Nine Emperor Gods Temple is a good place to juxtapose or frame the vast paddy fields. It sits in the middle of he farm land. The ornamental windows on the perimeter wall fence provided a flash back to 2012. I captured the green paddy fields behind one of the windows back in 2012. Now in 2017, during the monsoon season, the fields are submerged in a sea of flood waters.

If you are attempting a visual comparison such as this, do not pull your hair out in frustration; if the two images don’t line up or match perfectly and there are reasons. The wall and windows were painted over and the paint may be of different pigments and hues.

Also the structure may have changed shape in the heat, over the years. Don’t forget the camera, sensor and lens are different and the rendition will be different. Amazingly, both cameras picked identical exposure settings in auto metering.

This post and pic is available as a bigger pic at www.tvsmith.my